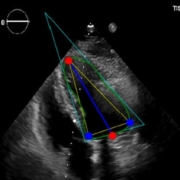 Segmentation of the Left ventricle (LV) is a crucial step for quantitative measurements such as area, volume, and ejection fraction.

However, the automatic LV segmentation in 2D echocardiographic images is a challenging task due to ill-defined borders, and operator dependence issues (insufficient reproducibility). U-net, which is a well-known architecture in medical image segmentation, addressed this problem through an encoder-decoder path.

Despite the outstanding overall performance, U-net ignores the contribution of all semantic strengths in the segmentation procedure. In the present study, we have proposed a novel architecture to tackle this drawback. Feature maps in all levels of the decoder path of U-net are concatenated, their depths are equalized, and up sampled to a fixed dimension. This stack of feature maps would be the input of the semantic segmentation layer. The performance of the proposed model was evaluated using two sets of echocardiographic images: one public dataset and one prepared dataset.

The proposed network yielded significantly improved results when comparing with results from U-net, dilated U-net, Unet++, ACNN, SHG, and deeplabv3. An average Dice Metric (DM) of 0.953, Hausdorff Distance (HD) of 3.49, and Mean Absolute Distance (MAD) of 1.12 are achieved in the public dataset. The correlation graph, bland-altman analysis, and box plot showed a great agreement between automatic and manually calculated volume, area, and length.

Want to join the discussion?
Feel free to contribute!