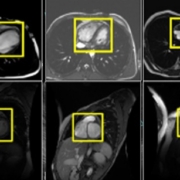 Convolutional neural networks (CNNs) are extensively used in cardiac image analysis. However, heart localization has become a prerequisite to these networks since it decreases the size of input images. Accordingly, recent CNNs benefit from deeper architectures in gaining abstract semantic information.

In the present study, a deep learning-based method was developed for heart localization in cardiac MR images. Further, Network in Network (NIN) was used as the region proposal network (RPN) of the faster R-CNN, and then NIN Faster-RCNN (NF-RCNN) was proposed. NIN architecture is formed based on the “MLPCONV” layer, a combination of a convolutional network and multi-layer perceptron (MLP). Therefore, it could deal with the complicated structures of MR images. Furthermore, two sets of cardiac MRI dataset were used to evaluate the network, and all the evaluation metrics indicated an absolute superiority of the proposed network over all related networks. In addition, the FROC curve, precision-recall (PR) analysis, and mean localization error was employed to evaluate the proposed network.

In brief, the results included an AUC value of 0.98 for the FROC curve, a mean average precision of 0.96 for the precision-recall curve, and a mean localization error of 6.17 mm. Moreover, a deep learning-based approach for the right ventricle wall motion analysis (WMA) was performed on the first dataset and the effect of the heart localization on this algorithm was studied. The results revealed that NF-RCNN increased the speed and decreased the required memory significantly.

Want to join the discussion?
Feel free to contribute!